Could autonomous car testing be the rebirth of Castle Airport in Atwater?

The Merced County employee overseeing the rebirth of the former Castle Air Force Base says the key lies in a strategic plan and not just filling up space.

The 1,900 some acres of Castle Airport and its surrounding area has grown in popularity, especially among companies looking to test autonomous vehicles, according to Mark Hendrickson, Merced County’s Community and Economic Development director.

A roughly 310-acre space is now being called the California AutoTech Testing and Development Center, a project that benefited from a $6.5 million injection of cash in this year’s state budget attributed to Assemblymember Adam Gray, D-Merced.

Merced County residents are likely aware that Google’s autonomous cars project, called Waymo, already rents space at Castle for a mock city used to test the vehicles. But the testing center has also been used by Samsung Electronics, Mercedes-Benz-maker Daimler AG and several others officials say they can’t discuss, according to officials.

About a year ago, the county inked a deal with the Port of Los Angeles, the largest port in North America, according to officials. Leaders have dubbed that space the Mid-California International Trade District.

About once a year county officials trot out their plans for Castle. Hendrickson said he often hears from frustrated residents who wonder why officials don’t fill up Castle with renters.

That was the plan 15 years ago, and it didn’t work, he said.

“It’d be real easy just to go out and fill space, but we don’t want to fill space. We want to do it with a purpose,” he said. “We got a lot of work to do. We’re at Step 2 of probably a thousand more steps.”

Castle and the county took a hit when AT&T closed its call center in 2014 but has since rebounded, according to Supervisor Daron McDaniel. About 400 people were laid off four years ago.

The former air base has more than 75 tenant businesses operating on site.

“There are more jobs at Castle today than there were when AT&T was there,” McDaniel said.

Along with the autonomous car project, the county and its corporate consultant GLDPartners look to make Castle a central hub for shipping. That dream has come closer to reality with plans to finish half of the “Merced loop” and free up funding for the Atwater-Merced Expressway.

The idea is to carve out a place for big rigs and trains transporting goods to stop in Merced County, according to Adam Wasserman, a managing partner of GLDPartners. The county is working on developing the relationships with the Port of LA, Oakland’s port and the BNSF Railroad.

Those kinds of connections have the potential for companies to truck in goods shipped into ports from Asia and vice versa, he said.

“This project will be a global project the day it’s opened,” he said. “It’s because we happen to be next to Silicon Valley. It’s our gift. Now it’s our job to turn it into unique value.”

Mark Hendrickson, department director of Merced County Commerce Aviation and Economic Development, speaks about plans that call for a section of land at the former Castle Air Force base to be developed into a high-tech environment for the testing of autonomous vehicles as well as associated equipment in Atwater, Calif., on Wednesday, Aug. 29, 2018. “There’s really no other comparable place in this country to do exactly what we’re contemplating doing, which is providing an environment designed by industry, for industry so that this technology can be advanced ultimately to the market place,” said Hendrickson. Andrew Kuhn akuhn@mercedsun-star.com
June 26, 2018 By Jennifer Economy • Energy • Logistics 0 Comments

The San Joaquin Valley Air Pollution Control District is partnering with a maker of zero-emission off-road technologies to deploy the state’s first mobile power stations at the Port of Stockton, officials announced last week, a move that will boost air quality around the port and improve public health.

“This project is a great example of how the cap-and-trade program is fighting climate change while improving local air quality and delivering benefits to disadvantaged communities,” California Air Resources Board’s Maritess Sicat said in a statement.

The port will be using two battery-electric 30,000-pound capacity forklifts with additional cargo handling attachments, including a multipurpose cargo truck bed and scissor-lift. ChargePoint, the world’s largest network of electric vehicle charging stations, will install two DC fast-chargers at the port to support the equipment.

The cap-and-trade program also creates a financial incentive for industries to invest in clean technologies and develop innovative ways to reduce pollution. At least 35 percent of these investments are made in disadvantaged and low-income communities.

Recently approved by the California Public Utilities Commission, this pilot will be a test case for PG&E’s new “FleetReady” program, which supports electric charging for customers with medium-duty, heavy-duty, and off-road fleets such as transit agencies, school districts, and delivery fleets.

For this new pilot with San Joaquin RTD, PG&E will test how smart charging and battery storage can lower operating costs and maximize efficiencies for the agency.

Seeking to partner with a transit agency located in a disadvantaged community which already had electric buses and plans for more in the future in order to meet the timelines of the project proposal, PG&E chose RTD.

“Because we already had a plan for adding more electric buses to our fleet and have a long-term goal around electrification, PG&E approached us with this pilot opportunity,” says CEO Donna DeMartino. “Due to our focus on electric transportation, PG&E can jump right into creating the specifics of the pilot, which aligns with our goal of being powered by 100 percent electric vehicles by 2025.”

The budget for this pilot is $3.35 million, which includes: 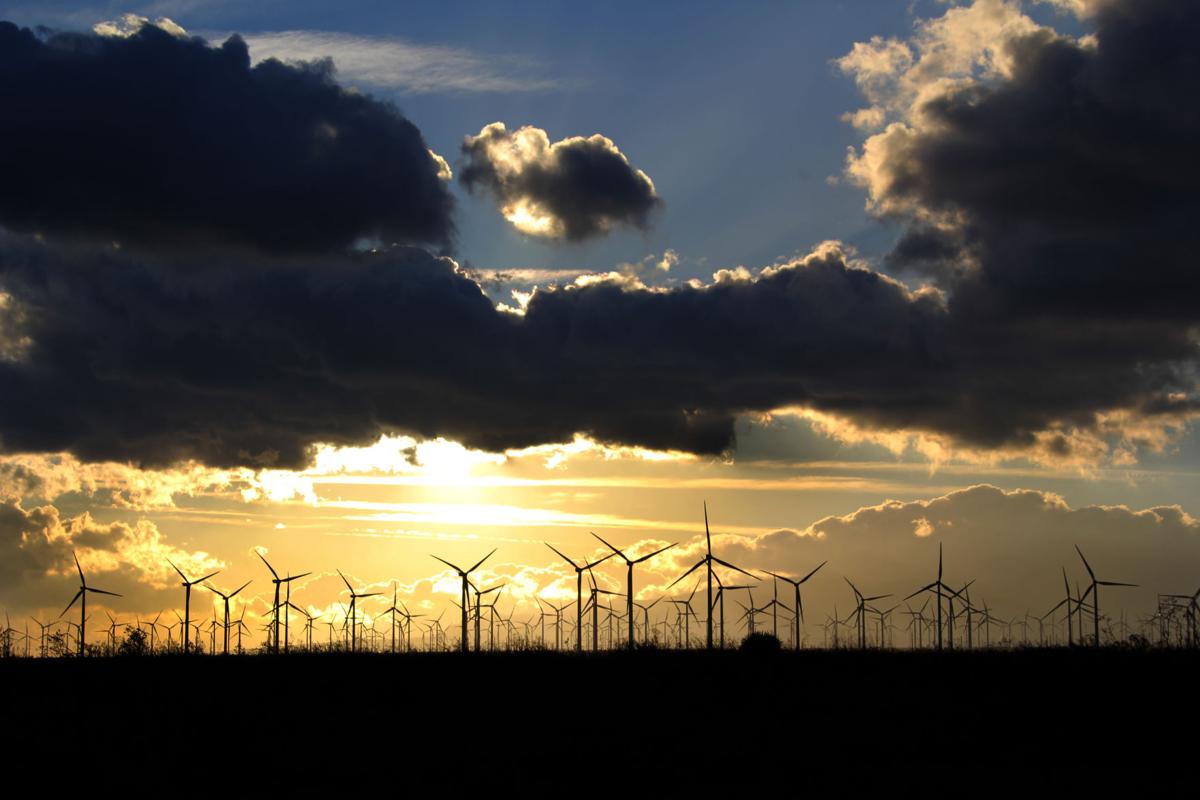 Kern County has more wind turbines than any other county in the nation, according to the U.S. Geological Survey. This is a photo of a wind farm in the Mojave area.

In this Californian file photo, a wind turbine blade is prepared to be hauled from the Mojave Airport to an area south of Mojave where the towers and turbines would be erected to generate electricity.

Remember when oil was king in Kern County? Maybe it still is, but Kern is the king of wind power.

According to the U.S. Geological Survey, Kern has more wind turbines — 4,581 — than any other county in the nation.

The USGS has created a database that mapped all 57,636 of the nation’s wind machines, Energy Digital reported. Not only does the Golden Empire have more turbines, the USGS says it has the highest turbine density in the world.

That’s a lot of juice.

According to the survey, Kern has a total wind power capacity of 4 gigawatts, and more turbines than the entire northeast region of the United States.

To put this in perspective, there are a billion watts in one gigawatt. That’s a lot of light bulbs. Now multiply by four.

That’s enough to power between 1.2 million and 2.9 million homes, depending on the vagaries of seasonal demand. Obviously, most of that power is being exported outside of Kern.

The USGS generated the database in partnership with the Department of Energy, Lawrence Berkeley National Laboratory and the American Wind Energy Association.

The California Resources Corp. has acquired 100 percent ownership of the Elk Hills oil and natural gas field in Kern County, according to the company.

The oil company said it purchased Chevron’s interests for $460 million and issued 2.85 million shares of CRC stock to Chevron. The deal went through April 1. Chevron had owned about 20 percent of the field’s assets. CRC had owned the rest of the field and has been its operator.

“We have operated this field for over 20 years and have developed a deep knowledge of the geology and strong operational expertise to deliver robust value from this asset,” said CRC President/Chief Executive Officer Todd Stevens. “We intend to apply this know-how to our newly acquired position, as well as transfer learnings and efficiencies to enhance CRC’s assets across California.”

In 2017, the interests that Chevron held produced approximately 13,300 barrels of oil and natural gas liquids per day, according to the company.

CRC estimates that based on current prices, the field could provide the company an operating cash flow of around $100 million annually. Elk Hills is now estimated to make up about 43 percent of the company’s total production.

CRC’s acquisition of Chevron’s interests comes after the company went into a joint venture on the Elk Hills field in early 2017 with a portfolio company that is part of the private equity group Ares Management, L.P.

Ares paid $750 million and purchased 2.34 million shares in CRC stock to obtain some of CRC’s Elk Hills assets. The particular interests under the agreement are the Elk Hills power plant, a natural gas-fired power plant and a cryogenic gas-processing plant.

Some of the proceeds from the joint venture were used in purchasing Chevron’s interest in the field, Stevens said.

“Acquiring sole ownership of such a prolific field is an ideal use of proceeds from our recent midstream joint venture transaction, adding both immediate production and cash flow, while providing for quick synergies and tremendous long-term development opportunities,” he said.

Elk Hills, located west of Bakersfield, was initially discovered in 1911 and has produced more than 2 billion barrels of oil and gas since then, according to CRC.

The California Resources Corp., headquartered in Los Angeles, is one of the state’s largest oil and natural gas producers.

Each fall, industry leaders gather in Bakersfield to exchange information on the latest advances and innovation in the energy industry, specifically as it affects Kern County’s position as a U.S. energy leader.

Kern EDC partners with other industry supporters every November to explore current challenges and opportunities facing the petroleum, utility, and renewable energy industries. By attending this annual forum, you too will have a chance to network with top industry experts and suppliers to learn about local innovations and technologies that are shaping the energy future of the state and nation.

“We are pleased to start the quarter with continued growth in our renewable portfolio,” says Southern Power President and CEO Buzz Miller. “Gaskell West 1 is an excellent fit for Southern Power’s evolving business as we strive to meet market demands through our commitment to develop clean, safe, reliable and affordable energy resources for the benefit of our customers.”

Construction of the approximately 280-acre project began in October 2017, and the facility is expected to begin commercial operation in March. Southern California Edison will purchase the electricity and associated renewable energy credits generated by the facility under a 20-year power purchase agreement and will have the option to keep or sell the associated credits. Southern Power purchased the facility from Recurrent Energy, which is developing the project. The purchase price was not announced.

D.H. Blattner & Sons Inc. is performing the engineering, procurement and construction services, and First Solar Energy Services will operate and maintain the facility upon completion. Southern Power plans to use third-party tax equity as part of the funding of the transaction.

The announcement marks Southern Power’s fifth solar facility within Kern County and 12th solar facility within California. With the addition of Gaskell West 1, Southern Power owns more than 3,500 MW of renewable generation from 38 solar, wind and biomass facilities either announced, acquired or under construction from California to Maine. In total, the Southern Company system has added or announced more than 6,500 MW of renewable generation since 2012.