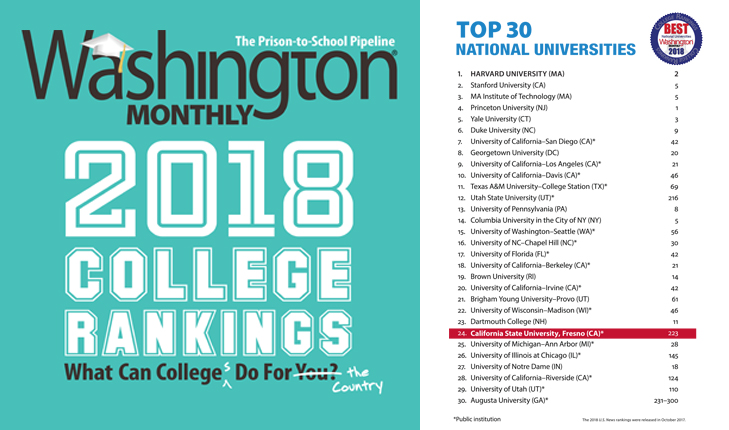 The newest national ranking of the top universities in the United States shows Fresno State is delivering on its mission to boldly educate and empower students for success. For the third consecutive year, Fresno State is among the nation’s best at combining academic excellence with economic opportunity.

Washington Monthly, a D.C.-based magazine known for its annual rankings of American colleges and universities, announced Aug. 27 that Fresno State placed No. 24 on its list of the top national universities.

Fresno State was selected alongside seven Ivy League institutions, including top-ranked Harvard University; six University of California campuses; and MIT on the list. Fresno State ranks 12th among the 17 public institutions included in the rankings.

Washington Monthly has been ranking colleges and universities for 13 years with what it calls “a different kind of college ranking” focusing on three equally-weighted criteria: social mobility, research and public service. The rankings are “not based on what colleges do for themselves, but on what they do for their country,” recognizing universities that “push the boundaries of scientific discovery and provide paths to opportunity for the next generation of low-income students.”

Fresno State was also the No. 2 school in the national university category in commitment to spending federal work-study funds on public service. At Fresno State, almost 70 percent of work-study funds go to service. The University was ranked No. 4 nationally in the net price of attending after subtracting grants and scholarships.

Fresno State, as a University that enrolls many first-generation college students and helps them graduate, was cited last year by Washington Monthly for its “stellar graduation rate relative to other colleges with a similar admissions profile.” The magazine also said Fresno State’s “net price of attendance (what students pay after scholarships are deducted from tuition) is among the very lowest nationwide.”

Castro said Fresno State’s continued presence in the rankings alongside such prestigious universities nationwide demonstrates the potential and value of the University when students, faculty and staff are all working together toward improving graduation rates and making an impact in the Central Valley and beyond. About 80 percent of Fresno State graduates stay and work in the Valley.

“These types of national distinctions are possible when we choose to be bold in all that we do at Fresno State,” Castro said. “Every day on campus and in the community, we encounter students and alumni who are using the opportunities provided at Fresno State as a launching point to advance in their lives and achieve their goals. That happens with thousands of graduates each year and the result is a more prosperous region.”

In May, Fresno State celebrated its largest graduating class ever with more than 6,000 students earning degrees. Enrollment at Fresno State this fall is at an all-time high of more than 25,200 students, and more than 80 percent of those students are from the Central Valley.

Fresno State was reclassified as a Carnegie doctoral university in 2016, meaning it was reviewed the past three years with the nation’s top doctoral granting institutions rather than the top master’s universities. Fresno State offers doctoral degrees in nursing, physical therapy and educational leadership.