Central CaliforniaPress RoomEconomyElectric Vehicles In The Central Valley Could Get A Big Boost Thanks To The VW Settlement
September 21, 2017 By Jennifer Economy 0 Comments

A major scandal rocked the auto industry two years ago when it was discovered that the car company Volkswagen had been systematically cheating on diesel emissions tests. That scandal might soon turn into a big boon for electric cars in the Central Valley.

The company agreed to a massive settlement worth more than $1 billion. Over the next ten years, $800 million is supposed to be spent in California to beef up electric car infrastructure and access.  Of that, 35%, or about $280 million, is earmarked for low income and high pollution areas like Fresno, Bakersfield and much of the rest of the San Joaquin Valley.

Joel Espino, with the environmental advocacy group The Greenlining Institute, says the focus is on these areas because they have suffered the most due to VW’s deceit.

“Those emissions, those extra emission, that were put into the air, didn’t affect everyone equally. A lot of the communities who live near busy roads and freeways, low-income communities of color, were harmed the most as a result,” Espino says.

There are more than 66,000 registered electric vehicles in the Central Valley according to the CA DMV

So now a plan is in motion to build up the support network needed to make electric cars viable in low-income areas and across the broad rural plains of the valley.

Dean Florez is with the California Air Resources Control Board, which helped craft the settlement.

“I mean it is kind of like asking someone to buy an IPhone, having it fully charged. And then leaving the store and being told you can only charge it at the local post office which might be 30 or 40 miles away.” Florez says.

Florez sees this settlement as just the boost electric vehicles need. And it’s coming at a time when electric vehicles seem to be finding their niche. This year, EVs are expected to represent about 3% of new car sales state wide. That would be an all-time high.

According to the California DMV, there are almost 168,000 all electric vehicles registered in the state.

“We really want folks to feel like even though they can’t charge at home, they still will have the ability to charge out in the world. You know, you can’t put gas in your car at you home. Most people don’t have a gas station at their house. So it%u2019s really it’s no different than that”-Jamie Hold

At this point, it is unclear where the stations will actually go. However, Florez says they have an agreement with Volkswagen to check in every month and make chargers are being spread out to the areas that most need them, not just the areas where they will be most used.

“Unless we have more density in terms of infrastructure, getting the Central Valley, which is dire need of mobile source reduction in pollution, to move to EVs is almost an impossibility,” Florez says.

This new plan could help people like Jessi Fierro, who is a busy mother of two young children and with a typically packed family car.

“It’s kind of a mom mobile. I manage to keep the front pretty clear. But you will see in the back I have both my car seats ready to go,” Feirro says pointing to car seats in her car at her office.

She drives a Chevy Bolt. That’s an all-electric car with a range of about 230 miles, which for electric cars is really good.  She is lucky because her office offers a charging station for her.

Still, Fierro says she is always aware of where the next charging station is and sometimes plans her trips around them. 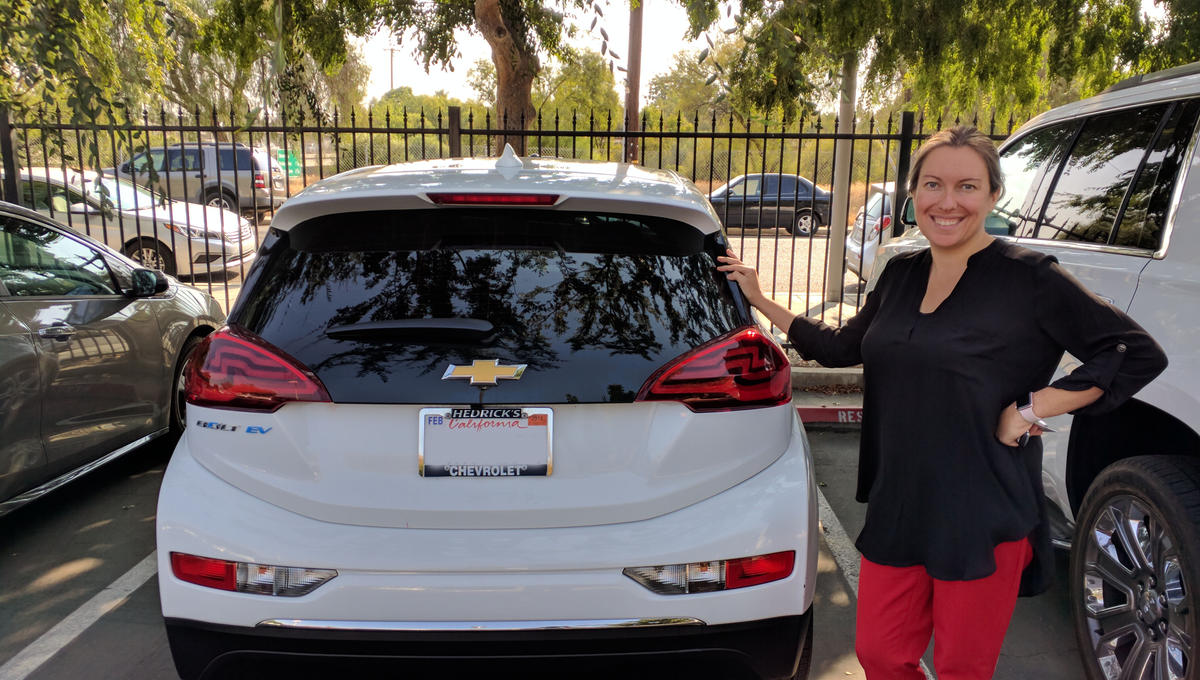 Jessi Fierro poses next to her bolt.
CREDIT JEFFREY HESS/KVPR

“And when I have taken my longer trips out of town I am trying to find destinations close to chargers, just so the kids aren’t getting too fussy while I am charging my car. But for the most part, when I am putzing about town I know where a handful of charges are. And actually there are aps too for your phone so you can say ‘I am going to be here. Where are chargers nearby,’” Fierro asks.

Fierro says she has no regrets about going electric and rarely charges her car at home, preferring to find chargers in the wild.

Some possible sites for the new chargers include workplaces, grocery stores, public parks and big box retailers with their massive parking lots. The San Joaquin Valley Air Pollution Control District says they are working to convince, and financially incentivize, businesses to install the chargers for their employees and customers.

Frequent and convenient charging stations are perhaps the most critical part of the plan according to Jamie Holt with the San Joaquin Valley Air Pollution Control District.

“We need charging stations to be as prevalent throughout the valley as gas stations are now,” Holt says.

She says they are trying to change hearts and minds about the reliability of access to power for electric vehicles, especially for people who live in apartments or park on the street where at-home charging is not possible.

“We really want folks to feel like even though they can’t charge at home, they still will have the ability to charge out in the world. You know, you can’t put gas in your car at you home. Most people don’t have a gas station at their house. So it’s really it’s no different than that,” Holt says.

Holt says the more the cars saturate the market, the more likely it is people will become more comfortable with the idea of driving an electric car. She also says they are working to break the perception that electric cars are only something that rich people on the coast use.

To that end, she says there are a wealth of rebate and pre-bate programs, some that are income based, to help low and moderate income families go electric. And especially in the valley, those families could stand to the benefit the most.