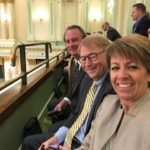 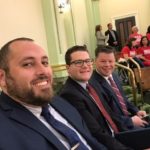 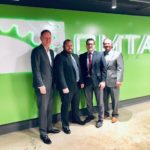 March 25, 2019– Representatives from EDC’s throughout the Valley met with more than 20 legislators and top government officials to bring the voice of Central Valley businesses to the Capital. On the list of top priorities for the valley were Workforce Development, Infrastructure Development, Regulatory and Tax Reforms, Opportunity Zone and Tax Incentives. Central Valley priorities were presented in comparison to a list of top site selection factors for business.

“Each year, the CCVEDC Board meets with legislators to discuss mutually beneficial priorities for economic prosperity. This year we were very optimistic after speaking with Valley representatives, the Governor’s Office of Economic Development, and the new Lieutenant Governor. It was a very busy and constructive two days in Sacramento,” according to Lee Ann Eager, Co-Chair of the California Central Valley Economic Development Corporation, comprised of the eight EDC’s from San Joaquin to Ke

As manufacturing is a large and still growing economic part of the Central Valley, the role of investing in Workforce Career Technical Education (CTE) has never been more important. CCVEDC supported the  State in continuing to invest and, if possible, increasing investment in Career Technical Training. Specifically, advanced manufacturing, value-added agriculture, logistics, and technology development.

“Workforce and Economic Development in the Central Valley have worked together hand in hand for more than 30 years, leveraging each other to the benefit of business and residents.  The legislators from the Central Valley understand and support the continued investment in this collaborative effort and the positive economic effect produced by this partnership,” stated Lace Lippincott, CCVEDC and CCWC Board Member.

The Central Valley is experiencing significant economic growth and activity. Yet, infrastructure development has been left behind and is needed to attract and grow jobs in this critical transportation corridor. The Central Valley is a prime location for advanced manufacturing, distribution, energy development, water technology among other sectors which support California’s identity as an innovation leader.

“It is important for our state legislators to be aware of the unique issues of the San Joaquin Valley. Water issues effect more than just farming operations, it effects all the other ancillary industries that thrive because of agriculture.” noted Bobby Kahn, CCVEDC Board Member and Treasurer.

Of California’s four million businesses, 3.1 million are sole proprietorships and 87% of companies have 20 or fewer employees. A complex regulatory process creates a significant burden on small businesses, causing many to consider leaving or expanding outside of the state.

“A vibrant entrepreneurial ecosystem in the Valley and the State is vital to the economy. Indeed, a region’s startup activity is a key factor in overall economic growth. It is critical to for these companies to be provided with relief from onerous regulations that hinder future investment and job creation,” according to Richard Chapman, CCVEDC Board member.

According to business, tax credits and other incentives can go a long way toward boosting capital — especially when the project involves job creation or a major capital investment. The new Opportunity Zones program is attractive, but hard to access and understand. Incentives allow manufacturers a chance to recover costs expended for workforce, research and expanding/staying in California.

“We encourage the legislature to conform state tax law to federal tax law treatment of Capital Gains under the Opportunity Zones incentive which will bring new investment and jobs into center city areas in need of redevelopment. Thirty-four other states have adopted state tax conformity provisions, but California has not. The Central Valley is home to over 150 Opportunity Zone census tracts that represent some of the most disadvantaged communities in nation,” stated Mike Ammann, CCVEDC board member representing San Joaquin Partnership.

CCVEDC is a not-for-profit Corporation whose mission is to attract and retain jobs and investment in the Central San Joaquin Valley counties of San Joaquin, Stanislaus, Merced, Madera, Fresno, Kings, Tulare and Kern. They are supported by the 8-counties in the Central Valley, Central California Workforce Collaborative, PG&E and Central Calif/Central Mother Lode Regional Consortium (CRC) Partnership.