Less than a year since Google’s Self-Driving Car project became Waymo, the company is close to commercializing its extensive R&D. The Alphabet Inc. unit this week showed off how it’s fine-tuning sensors and software on faux city streets at a secret complex in a sleepy agricultural section of California to achieve that goal.

Known as the Castle, a nod to its former life as Castle Air Force Base, the Atwater, California, facility is where Waymo technicians since 2012 have safely created what they call “spicey” scenarios – complex interactions with other cars, pedestrians and bicyclists to help its robotic vehicles get smarter. CEO John Krafcik said tests there on streets with names like McFly Way and the Shirley Muldowney Expressway are vital complements to the 10,000 miles of public road tests and 10 million virtual miles Waymo now racks up daily. 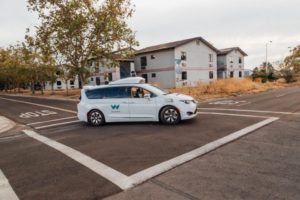 “Our intention, make no mistake, is to go fully driverless and let the public access this technology on public roads. We’ve been working so hard on that task,” he told a group of journalists touring the Castle this week. And while Krafcik, a long-time Hyundai and Ford executive who’s led the former Google X unit since 2015, won’t say exactly when Waymo goes commercial, he leaves no doubt that that’s coming.

A decade since a team of Carnegie Mellon University engineers won the 2007 DARPA Urban Challenge and eight years since Google began a (once) top-secret program to perfect autonomous car technology, Waymo appears to be at the leading edge of the self-driving revolution. After more than a $1 billion of R&D, it’s weathered the loss of key founding team members, faces numerous competing programs at auto and tech companies and is pursuing a rancorous lawsuit with Uber. Yet Waymo’s approach to testing, deployment and strategic partnerships is unfazed and laser-focused on building a business.

Google began doing vehicle tests at the Castle in 2012 after it outgrow a parking lot near company headquarters in Mountain View. While the old base’s tarmac is a bit past its prime, Waymo created a variety of new streets, a roundabout, cul-de-sacs and a highway-like section, all ringed by solar-powered streetlights. A few of the old Air Force buildings and barracks left when the base was decommissioned in the 1990s have been repurposed for Waymo engineers, while others appear to be slowly deteriorating.

On the Castle’s streets careless workers unloading a moving van might unexpectedly drop boxes in the path of a vehicle; rude drivers veer into a Waymo minivan’s lane abruptly and without signaling; and cars backing out of driveways in a simulated residential neighbor pull out when least expected. None of these scenarios appear to trouble the robots at the wheel.

In April Waymo began an “Early Rider” program in Chandler, Arizona, where residents who applied for the program can hail one its self-driving Chrysler Pacifica Hybrid minivans to take them anywhere they request in the metro-Phoenix area.

Although technicians are in the front seats of those vehicles for added safety for now, Waymo technical chief Dmitri Dolgov told reporters this week the minivans already have Level 4 autonomous capability, meaning they can drive without a human at the wheel in most circumstances. “We’re testing everywhere, in downtown streets, on freeways, on all kinds of streets,” Dolgov said.

To show just how sophisticated Waymo’s system has become, it put reporters in the back of its vans for brief test rides around the 60-acre Castle complex with no human at the wheel. That’s not standard practice for any company developing autonomous vehicle technology. Notably, Waymo didn’t require any of the few dozen journalists in attendance to sign legal waivers before taking a ride.

During the 1.5-mile loop, technicians acting as pedestrians, riding bicycles or driving other cars crossed paths with autonomous Waymo minivans. In each case, none of these distractions proved to be a problem. It was as if a skilled invisible driver was at the wheel. Which is precisely Waymo’s goal.

Krafcik identified four applications for the technology that are “super obvious and likely first steps for us.”

The first is in a ridesharing service – that may or may not be under the Waymo brand. Second is for commercial delivery applications. “Things like trucking and logistics makes a lot of sense for a company like Waymo,” he said.

Waymo may also work with cities to provide “last-mile” services that help people get from their homes to a transit station, for example. Interestingly, supplying the technology for use in personal vehicles ranks only fourth in Waymo’s priorities.

“For sure we see this technology as having the potential to be transformative, to make a lot of really good change for the world.”

PORT OF STOCKTON — One company is making moves to speed up production and make operations more efficient.

M&L Commodities, Inc., based at the Port of Stockton, is expanding its service to include direct-vessel loading and unloading with new high-velocity conveyor belts.

The new conveyors feature 48-inch wide belts and can telescopically reach 190 feet. Maximum delivery of commodities to and from portside vessels can reach a rate of 2,000 tons per hour.

The belts will help with import operations to the company’s facilities, truck and rail and with export from the facilities directly to vessels via ship loader. The move is part of M&L’s expansion plan for infrastructure using “up-to-date, high technology equipment for more productive and efficient operations,” according to a statement released by the company.

M&L Commodities is a logistics service provider, assisting customers with transportation of goods. The company has more than 50 years of experience in international trade. They have strategically placed their operations for close proximity to railways, major interstate arteries and the Port of Stockton.

The San Joaquin Valley Business Conditions Index, compiled by researchers at Fresno State University, has moved down, but still points to strong growth in the next three to six months.

“The region is currently experiencing solid manufacturing growth combined with upturns in regional construction,” says Ernie Goss, research faculty with the Craig School of Business at Fresno State. “However, as in past months, durable, or heavy manufacturing, continues to lag behind non-durable manufacturing, including food processing.”

The index is a leading economic indicator from a survey of individuals making company purchasing decisions for firms in the counties of Fresno, Kings, Madera and Tulare. It is produced using the same methodology as that of the national Institute for Supply Management.

The Components
• Employment: After moving below growth neutral for December, the employment gauge climbed above the threshold every month since. The August index declined to a still healthy 57.9 from July’s record high of 63.2.

“Over the past 12 months, the San Joaquin [Valley] region has experienced strong and improving job growth at 2.1 percent, which is well above the pace of the nation’s 1.5 percent,” says Mr. Goss.

• Wholesale Prices: The prices-paid index, which tracks the cost of purchased raw materials and supplies, slipped to 70.2 from 71.2 in July, indicating modest but elevated inflationary pressures at the wholesale level.

“I expect inflationary pressures at both the consumer and wholesale level to moderate in the months ahead. As a result, I expect the Federal Reserve to delay another rate hike until the end of the fourth quarter of 2017, or first quarter of 2018,” says Mr. Goss.

• Business Confidence: Looking ahead six months, economic optimism, as captured by the business confidence index, slipped to 65.3 from July’s 70.0.

• Inventories: In another show of economic confidence, the inventory index remained above growth neutral for August. The August inventory declined to 52.3 from 54.5 in July.

To streamline all project construction, SunLink standardized its mounting solution design and permit set to align with CalCom’s installation preferences. SunLink PowerCare geotechnical testing was also performed on sites in Madera and Tipton, Calif., to optimize designs and inform the installation teams in order to further accelerate these projects’ timelines. CalCom was then able to customize and complete the installation per that customer’s needs, such as uneven terrain and boundary constraints.

“When it comes to the geotechnical, engineering and installation expertise essential for agricultural solar projects, our suite of products+services+software solutions answers the needs of farmers and growers for lower project costs, reduced risk and easy long-term operation. We understand the project priorities and drivers of this market,” said SunLink CEO Michael Maulick. “Working closely with the other agricultural experts at CalCom, we are able to streamline the entire project lifecycle and deliver more successful energy assets.”

“CalCom Solar has the technology and knowledge that can help make solar work for many farmers both financially and operationally. By going solar, farming operations can significantly lower operational costs, saving them more money annually on utility bills. The system will also help hedge against raising utility rates, delivering significate utility savings over the next 25 years,” stated Dylan Dupre, CEO of CalCom Solar. “CalCom has made a name for itself as a leader in Central Valley agricultural solar with more than 100 MW deployed at some of the largest agricultural sites in the region. We seek out partners who also pride themselves with capabilities in this area, and SunLink’s demonstrated success from engineering to mounting solutions has proven a valuable asset.”

Founded in California’s Central Valley, CalCom Solar provides energy solutions for commercial agricultural operations and water management organizations. Today CalCom Solar employs 58 people full-time, and hires as many as 70 temporary employees from the local community. The success of the company reflects CalCom Solar’s sustainability ethic and strong conviction that a company can provide customers with reliable energy solutions, maintain profitability, and have a positive impact on the community and the environment. For more information, please visit www.calcomsolar.co