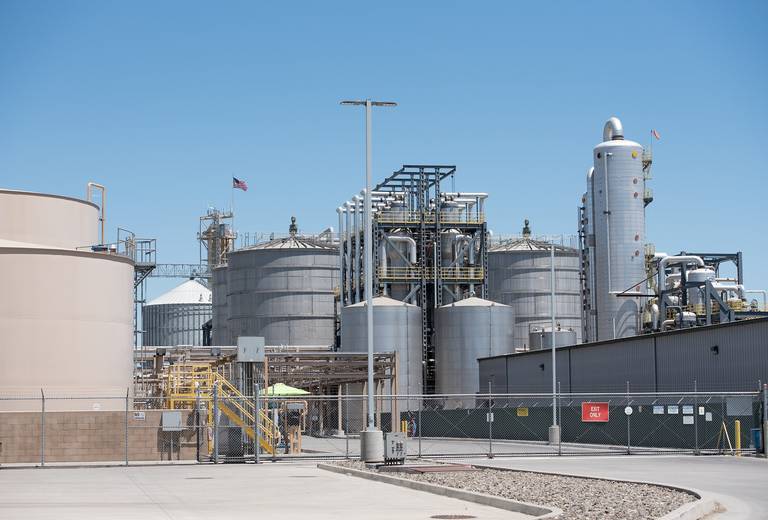 The intriguing process should keep growers from burning millions of tons of orchard waste, spewing unhealthy smoke into Valley air. That wood instead would be transformed into cellulosic ethanol, a superclean liquid that’s mixed with gasoline and goes into our vehicle gas tanks.

Is it safe? And will there be new jobs?

Yes and yes, says Aemetis Inc., the Cupertino-based company willing to take a chance on Riverbank, and on new technology.

The future plant will need about 40 workers when it joins 38 other businesses at the former army ammo plant southeast of town, now known as the Riverbank Industrial Complex. About 1,000 other people will get indirect jobs trucking orchard waste to the Aemetis plant, trucking away low-carbon cellulosic ethanol, maintaining trucking fleets, and related services.

“It is a significant, meaningful impact on the community,” said Andy Foster, president of the firm’s renewable fuels division.

Aemetis has a track record in this area, having operated a biofuel plant 14 miles down the road in Keyes since 2011. The Keyes plant uses corn to make conventional ethanol, while the Riverbank plant will consume nut shells and almond, walnut and pistachio trees, saving them from landfills or from being burned in fields.

“Cellulosic ethanol is thought to be better for the environment than corn ethanol, as they make (cellulosic) ethanol from woody waste rather than growing corn just to make into ethanol,” said Jaime Holt, spokeswoman for the San Joaquin Valley Air Pollution Control District.

Experts calculate benefits with complex formulas taking into account everything needed to grow and harvest whatever is used to make transportation fuel. The so-called carbon intensity score for gasoline, 95, drops to 70 for corn ethanol. But the score for wood ethanol is less than zero; that’s how beneficial it is to reuse a product that otherwise would belch smoke when burned in the open.

Aemetis already has a 20-year deal with a tree waste broker who will capitalize on the almond explosion in these parts, with trees covering 1.5 million acres in recent years. The average life of an almond tree is 20 to 25 years, and the Valley produces about 1.6 million tons of tree waste each year.

Aemetis also has a 55-year lease on land at the former ammo plant, at Claus and Claribel roads. The company will renovate some old buildings and erect others for the new wood ethanol plant, which could produce 12 million gallons per year.

Byproducts include fish meal to be sold to big salmon farms, and others will be announced in time, Foster said. Together, wood ethanol and byproducts could bring annual revenue of $70 million, according to a BioFuels Digest report.

Neighbors need not worry, Foster said, because wood ethanol — although flammable — doesn’t explode like propane or petroleum, and Aemetis will install state-of-the-art firefighting equipment that will be second to none, like they did at the Keyes plant, he said.

The process does include “advanced arc furnace technology,” or burning; wood is superheated at 3,000 degrees, about the same needed to melt glass, turning wood into a gas before it’s cleaned and fed to microbes in a fermentation chamber. A resulting broth is distilled into cellulosic ethanol, or wood ethanol.

“We treat it with respect and care and take all the precautions,” Foster said. “The community shouldn’t be worrying about a big explosion.”

Well, this is somewhat uncharted territory. Although scientists figured out how to turn plants into fuel back in the 1800s, companies have had a hard time making a profit since with feedstock other than corn, despite best efforts of heavy hitters like DuPont and Abengoa. Those persevering reached a production high-point exceeding 10 million gallons last year, but that’s a fraction of the federal goal set in 2007, of blending 100 million gallons of cellulosic ethanol into the nation’s fuel supply by 2010.

“The bottom line is that cellulosic ethanol has fallen far short of the hype and the expectations,” wrote Robert Rapier in February for Forbes magazine.

Some view government subsidies, giving a leg up to emerging renewable fuels technology, as a negative. Aemetis will rely on a $125 million USDA loan for the Riverbank plant; loan requirements included the company successfully operating a demonstration plant in Washington state for 120 days, which Aemetis achieved in a March announcement.

Aside from Riverbank, Aemetis hopes eventually to announce additional wood ethanol plants in this area, Foster said. All would employ mechanics, engineers and other manufacturing workers at decent wages, he said.

Aemetis apparently is sold enough on Riverbank to compete for the job of taking over the entire 105-acre Riverbank Industrial Complex.

Started in 1943, the ammo plant produced shell, grenade and mortar cartridges as a major area employer until 2009. After nearly 30 years of cleaning contaminants from the land and water underneath, the U.S. Army last year conveyed some of the property to an entity overseen by Riverbank City Hall, and is expected to give the rest this summer.

“The city is not interested in continuing to be an industrial developer out there forever,” said City Manager Sean Scully. So city leaders in October asked for proposals from prospective master developers, and now are negotiating with Aemetis for the job. Rules set by the city require an employment boost, with priority for people living within 50 miles, and prevent new housing.

“This is our opportunity to create something where people can get jobs so they can work and live here,” Scully said. “We are blessed to have that opportunity.”