Visalia’s business boon is well underway and it doesn’t appear to be slowing down.

New development ranges from housing and hotels to training facilities and offices.

The city has projects popping up from Mooney Boulevard to Main Street and across the Industrial Park.

“Our city funds are driven by sales tax and property tax,” Nelsen said. “As we continue to grow, the city continues to benefit.”

“We continue to grow and have lots of land available to do so,” Gubler added.

There was a total of 301 new permits issued between the months of February and March with a total value of $11.6 million, city officials said. The permits included 21 new single-family homes, two new multifamily complexes and one new commercial project.

Dunkin’ Donuts is set to be completed this spring and more will follow on Mooney Boulevard.

There is currently a Marriot Residence Inn going up in the Plaza Business Park. It is projected by contractors to be finished this summer. Directly across the street is a new ARCO AM/PM gas station, currently under construction.

Clovis-based The Great Escape, an escape room themed entertainment activity for groups, has set its eyes on Visalia for its second location.

“We are super excited,” Wilkerson said. “A lot of clients we have come from the Visalia, Tulare, or Hanford areas and so we want to bring this a little closer to home for them.”

Wilkerson said it will be located at 3300 S. Fairway Street, near Bowlero and behind the Milan Institute of Cosmetology. The south Valley escape room will feature three escape puzzles perfect for team bonding opportunities or family get-togethers.

Two hotels have been proposed for the area. One is the renovation of a historic downtown building and the second is a new extended stay concept.

The Darling Hotel is a redevelopment project using the old Tulare County Courthouse downtown. The building has been vacant for decades and last August the Tulare County Supervisors were looking to give it new life.

In August, Councilman Greg Collins said, “You need to have an architect with vision,” to restore and develop the building.

In February, the boutique-style hotel proposal went through site planning and will feature 33 rooms and several meeting rooms. It will also feature a rooftop lounge and a ground level courtyard with an enclosed pool and canopy along Court Street.

A Hilton Home 2 Suites is being proposed in an area just north of Highway 198 and west of Plaza Drive. The hotel will feature 83 extended-stay concept style rooms that are also pet- and family-friendly, city officials said. 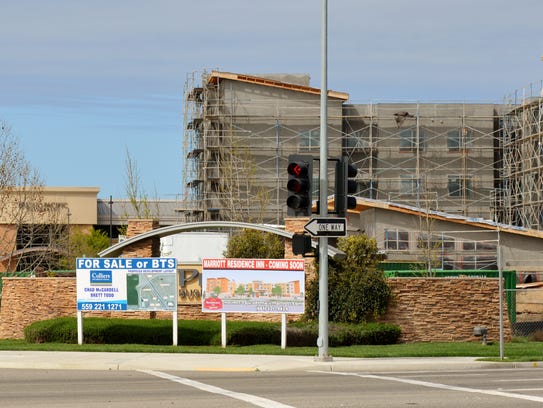 A new Marriott Residence Inn is under construction in Plaza Business Park in Visalia . (Photo: Danielle A Martin)

Voltage Multipliers, a local manufacturing company is looking to expand its current building by 20,000 square feet.

In Plaza Business Park, a 7,172 square-foot project is in the proposal phase. It will be located just north of Marriott Residence Inn, currently under construction.

The project will consist of two buildings with offices and classrooms. Visalia officials suggest a school or training facility.

Another 3,256 square-foot project at 4234 W. Mineral King will house the local Mitchell and Powell law firm.

The new development and expansions are humbling, Gubler said.

“It’s a compliment to our community that these businesses want to keep coming to open up,” Gubler said.