One decade after Bass Pro Shops announced its intention to build a store in Bakersfield — a plan that has been marked with uncertainty amid economic downturn — the outdoor retail giant announced Wednesday that it would build its fifth California location in Kern County.

The Missouri-based outdoor retailer, which specializes in hunting, fishing and camping gear, will open a 100,000-square-foot store to anchor an 800,000-square-foot mixed-retail center at the northeast corner of Hosking Avenue and Highway 99 known as the Bakersfield Gateway.

It will be the retailer’s only store between Manteca and Rancho Cucamonga. 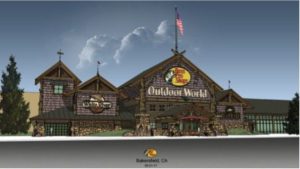 t on Bakersfield, one of the fastest-growing cities in the United States,” Bass Pro Shops founder and CEO Johnny Morris said in a prepared statement. “Our store will be a tribute to the great sporting tradition and heritage of the region and a celebration of the sporting men and women of California.”

No timeline or estimated date for when the store would open has been released.

Stephen Coslik, chairman of The Woodmont Company, the Texas-based developer planning the project, said he

Beyond anchoring the anticipated development, Bass Pro Shops could boost the local economy. It anticipates hiring between 250 and 300 employees, many of whom will be locals.

Bass Pro Shops announced its intention to open a 150,000-square-foot store in Bakersfield first in 2007 at the Bakersfield Gateway site, but the recession sidelined the project.

Bass Pro Shops never pulled out of the deal, which some considered critical to the success of the 93-acre development, said Bakersfield Community Development Director Jacqui Kitchen, adding, “it was just a long and extended negotiation.”

“With all the changes the retail sector has seen in the last several years, I think Bass Pro took some time to reflect on their overall development plans nationwide, but ultimately they realized this is a great opportunity they had within the city of Bakersfield,” Kitchen said. “It’s something we’ve all known is coming the last several years, and we’re very happy they’ve moved ahead with their (announcement).”

Although plans have not yet been finalized, Bass Pro Shop officials said in a press release that the Bakersfield location would include a gift and nature center featuring a variety of outdoor related items “from lamps and dishes to bird feeders and furniture.” It would also include an expansive boat showroom offering Tracker, Nitro, Suntracker, Tahoe and Mako boats built by White River Marine Group.

Bakersfield planning and development officials have been working for the last five years to woo the retail giant to town, Kitchen said. Once the retailer gets site plans approved through the planning commission and applies for building permits, the city plans to help Bass Pro coast through the process, Kitchen added.

“The city is ready and willing to help them get through all the permitting process and make sure there’s as little red tape as possible,” Kitchen said.

Most exciting about the deal, Kitchen said, was the size of the store.

At 100,000-square-feet, it’s not the largest tier store Bass Pro Shops constructs, but it is larger than what’s been rumored, Kitchen said.

“We wanted to make sure Bakersfield residents get the best available amenity,” Kitchen said. “It seems Bass Pro is seeking to do just that.”